A Letter to the Future 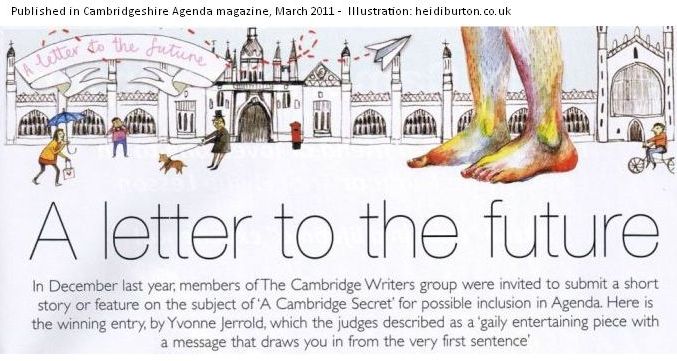 A LETTER TO THE FUTURE

I don't know who you are but I do know you are at least two inches shorter than I am.

"That wouldn't be hard," you might say, if you knew that I am six foot four inches tall!

My name is Matty Doonan and, although you do not know me, I believe you can see the effects of my life's work all around you.

When I was a child I was tall for my age and I loved reading stories about giants. I was particularly impressed by Gulliver who found himself a giant among the Lilliputians but a midget among the giants of Brobdingnag who were as tall as church steeples with a stride of ten yards.

This set me thinking and I became curious to know why I was so much taller than my friends. When I grew up I studied genetics and eventually ended up here, at the University of Cambridge where, about thirty years ago, I discovered a method of blocking the process which causes humans to grow taller with each generation as their health is improved by better nutrition.

I never published my research, but now Cambridge has offered me a chance to make my discoveries known to the world - although not yet!  This year, as part of its 800th anniversary celebrations, the University has invited the people of Cambridge to write 'Letters to the Future' which will be locked away for a hundred years before being opened.

This suits me very well, as I am not ready for my research to be known. Had this opportunity not arisen, I would never have put pen to paper on the subject.

After my initial discovery I devised a system for reducing population pressures, by causing humans to gradually  evolve into smaller and smaller beings and, since then, I have travelled the world personally embedding into the earth, and into water supplies, and into the food we grow, a formula which, even in my lifetime, is already showing signs of taking effect.

Well, I admit, I do look a bit like a mad scientist with my white hair and my tendency to wave my hands about but, believe me, my legacy to you and to the world is no fairy story. Rather, it is the single most important step taken by humankind this century, to lighten our footprint on the earth - literally - and reduce the damage we are doing to our planet.

I have not published my research because I know the only way it can benefit mankind is for me to implement it in secret, otherwise its progress would be blocked by ethical, moral and religious objections, as well as by all the common prejudices about the benefits of height.

Because, you see, in this century there is a huge preference in favour of people being tall. Tallness is associated with success and good health and beauty and I can see no prospect of persuading people otherwise in time to save the planet.

My system has the effect of blocking the fertility of the tallest people in a population and is designed as a self-perpetuating loop so that, once it has been running for a few generations, the process will become virtually impossible to reverse. And yes, in case you are wondering, there is a built-in 'bottom line' which will protect us from becoming too tiny to survive as human beings.

All this is happening so gradually that it is hardly noticeable at first and, by the time the trend is established, it will be too late to stop its progress. I calculate that in 800 years time the average height for a human male could be almost sixteen inches less it is now and, by the time Cambridge University has doubled its age to 1600 years old, its professors will have shrunk in to the size of a small child today.

As a result our civilization will undergo many changes. People will need smaller houses, will consume less food and fuel and, if they still use cars and boats and trains, these too will be much smaller.

This shrinkage will bring problems. For a start, all Cambridge's college buildings will become too large for practical use - if they are still standing that is - and King's College Chapel will seem as vast as pyramids to our pygmy descendants.

By then, too, the contents of this letter may be dismissed as the ramblings of a long dead giant in a fairy story.

Will anyone believe it? I wonder.

That is the trouble with secrets. If you keep them too long they vanish into legends.